Following calls for proposals launched by the European Defence Agency (EDA) in 2019, the consortium “PILUM” (Projectiles for Increased Long-range effects Using Electro-Magnetic railgun) has been selected to lead a research project on the electromagnetic railgun.

The project will last two years and aims at proving that this type of railgun concept is capable of launching hypervelocity projectiles with precision over a distance of several hundreds of kilometres. PILUM will thus demonstrate that the electromagnetic railgun has the potential to provide a disruptive change in the area of long-range fire support. Indeed, when compared with the former powder railgun, this new technology is capable of reaching a hypersonic velocity, multiplying the effective reach by five.

The so-called “railgun” is capable of accelerating projectiles at initial velocities far superior to those obtained by existing chemical guns. It uses electromagnetic force by injection of very high currents into conducting rails. The project will also examine the possibility of integrating the railgun into terrestrial and naval platforms. In a first phase, the project will validate the gun concept using numerical simulations and experimental work. The project represents a new major step towards developing a full-scale demonstrator in the next few years. It also includes reflection on concepts for future applications. This disruptive technology offers an important operational asset since it reduces the risk exposure of vehicles, vessels and crew by increasing the firing distance.

Critical to ensure capability superiority, this emergent concept will make a substantial contribution to reinforcing European strategic autonomy. It will also allow advances in many different fields of sovereign technology including aerothermodynamics, projectile technologies, material strength, energy storage and conversion as well as various electric and electromagnetic phenomena likely to produce benefits for further applications.

The consortium brings together nine partners from five European countries, each with its own industrial, technological and advanced scientific expertise:

By implementing a strict health and safety protocol, ISL has been able to resume all its on-site research activities as of Monday 4th May 2020

After closing its sites in Saint-Louis and Baldersheim on Wednesday 18th March and gradually returning to work as of Monday 6th April, the French-German Research Institute of Saint-Louis (ISL) has decided to resume all its on-site activities starting Monday 4th May 2020.

The health and safety of its employees and their families is the top priority for the Institute. Thanks to close collaboration with the Company Doctor and the constructive support of the employees’ representatives on the Works Health and Safety Committee, a health and safety protocol meeting the toughest French and German standards has been drawn up. Its gradual implementation over the last few weeks has proven its reliability.

Our scientific teams have been busy over the last few weeks exchanging with their partners and clients, working on the findings of recent trials and preparing the next series of tests. However, the true assets of ISL’s innovation and expertise lie in the experimental activities and complex simulations which can only take place on site.

A spirit of responsibility and commitment

“Whether on site or working from home - especially within the crisis team - we have all been determined to overcome adversity with enthusiasm, which is a hallmark of the keen spirit that motivates us at ISL,” emphasise Christian de Villemagne and Dr. Thomas Czirwitzky, Directors of ISL. “Acting responsibly together with the greatest vigilance, we are resolved to be of full service once more to our partners and our clients in the fields of defence and security.”

Contact
Vivienne Gaskell
Head of Communications
French-German Research Institute of Saint-Louis (ISL)
T: + 33 (0)3 89 69 50 20
E: This email address is being protected from spambots. You need JavaScript enabled to view it.
www.isl.eu

ISL at the forefront during the Military Parade on July 14th

A little robot equipped with the French and German flag opened this year’s military parade on July 14th on the Avenue des Champs-Elysées. Emmanuel Macron, Angela Merkel and many state representatives as well as members of the French government watched as STAMINA PATROL participated in the event dedicated to defence innovation.

STAMINA PATROL is an autonomous vehicle capable of following itineraries without GPS thanks to a cost-effective technology based on image processing. STAMINA PATROL resists jamming and can autonomously return to its point of departure or continue on its itinerary by avoiding obstacles.
On the afternoon of July 14th, the new robot STAMINA AUROCHS was on display during the operation “The French meet their army”. STAMINA AUROCHS is the result of the integration of the autonomous, itinerary-tracking STAMINA into a solid and powerful platform. Its agility, speed and comfort represent undeniable advantages enabling it to perform crucial tasks such as transporting injured people. 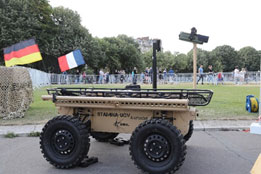