Highly qualified research groups settled in Saint-Louis in the very first days after the end of World War II. 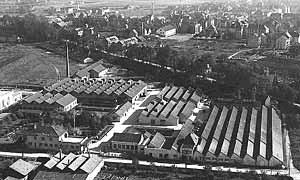 Professor SCHARDIN, a renowned German scientist, and the research institute of the German Air Force Technical Academy he directed had been relocated from Berlin to Biberach an der Riss. In late May 1945, he was invited to settle with his scientists in Saint-Louis in order to work for France.

This was regarded as a temporary solution at the time. However, the originality and the quality of the work done, as well as the enthusiasm shown in doing it, led not only to the research work being continued but even expanded. The original branch office of the "Laboratoire Central de l'Armement" headed by Chef d'Escadron CASSAGNOU, developed into the "Laboratoire de Recherches de Saint-Louis " (LRSL).

When the Federal Republic of Germany established the Bundeswehr in the mid-1950s, the best German scientists in key fields of defense research were working exclusively for the French defense organization. 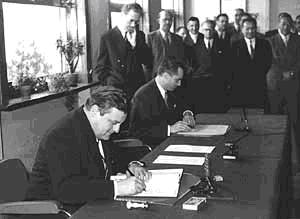 Professor SCHARDIN and Ingénieur Général de l'Armement CASSAGNOU proposed that the scientific research be continued on a binational basis. This was laid down in an agreement concluded by the two nations on 31 March 1958 that allowed ISL to commence its activities on 22 June 1959 on an already solid basis.

ISL was founded as a homogeneous binational research institute with its own legal personality. Its foundation anticipated the rapprochement between France and Germany, which was solemnly confirmed by the treaty of friendship in 1963 and has since been constantly manifested in the policy of both nations. Within 10 years, the staff increased to 460 German and French personnel.

22 June 1959
Foundation of ISL as binational institute by a parliament decree.